For British Romanticism artist John Atkinson Grimshaw, art and painting were something to be taken seriously. In Grimshaw’s mind, the artist’s goal was to attempt to truly capture the scene in which they painted with as much accuracy as possible.

This followed a more classical way of thinking and was contrary to the mainstream artistic belief of Grimshaw’s time. However, during the late 19th and onset of the 20th centuries, art had begun to move away from Realism and focus its energy on both the original and the abstract.

This led to John Grimshaw being viewed by many critics as an outlier and detached from current trends. Like any brave enough to dare to be original, Grimshaw’s artwork, although breathtaking, was met with a fair degree of criticism. The following article aims to conclude whether this criticism is justified or not. So, without further delay, let’s get started.

He Had A Limited Understanding of Perspective

The first thing worth mentioning about John Grimshaw is that he was self-taught. Depending on your viewpoint, this feat can be seen as an incredible accomplishment as Grimshaw’s paintings are sublime. However, where the true art critic finds fault is in the slight imperfections and inconsistencies contained within.

Some would argue that these slight imperfections give the paintings their unique charm, and an untrained eye wouldn’t even notice them. Still, some of Grimshaw’s paintings proved to be an easy target for the straight and narrow critic, whose job is to announce failures.

Much of the criticism he received went beyond mere nit-picking of minor details and instead focused on the fact that Grimshaw did things differently than his contemporaries. For example, one of the major gripes open to critique was Grimshaw’s use of tools to aid his work.

His Use of Lens Tools Was Looked Down Upon

There are two major conflicting perspectives artists have on using tools and technology to help them create their paintings. On the one hand, artists like Grimshaw, Vermeer, and Caravaggio viewed the techniques and use of tools as a great aid to their painstaking work.

On the other hand, the artist of a more purist mindset would argue that using devices to aid you in your work demands less artistic vision, skill, or effort. Some artists and critics have even been so bold as to call the use of tools a form of cheating and anything painted with such untrue art.

Both perspectives have pros and cons, and there is no truly right answer here. As a result, this criticism is almost entirely subjective and for you to decide. For example, do you take the stance of technology paving the way forward for a better future, or is it in simplicity and natural ability that comes closest to perfection?

His Art Could Be Viewed as Somewhat Repetitive

This criticism is another interesting one as it is again almost entirely subjective in its argument. The argument can be laid out more simply as a question. Would you rather be good at one thing or relatively good at many things?

For John Atkinson Grimshaw, the answer was simple. Most of Atkinson’s paintings focus on the moon’s light and how it relates to modern (primarily urbanized) society. Unfortunately, he painted this motif repeatedly, and to the critically minded, this repetition resulted in a fatiguing and diminishing of Grimshaw’s original concept.

Some critics have stated that you only need to see one Atkinson painting to understand his work. However, other critics would argue that every Atkinson painting describes a whole host of different meanings and more profound symbology, albeit under a similar backdrop of a desolate moonlit sky.

His Realistic Style Was Considered Outdated

John Atkinson Grimshaw’s romantically realistic paintings can be traced back to his interest and love of photography. This love shaped his paintings and artwork and ultimately steered him into the classical painting stylings of Realism and Romanticism.

During the period in which Grimshaw lived, however, both painting styles had been almost wholly dropped in favor of newer, more exciting ones such as Impressionism and Expressionism. As a result, it was only the group of painters known as the Pre-Raphaelites that maintained the models of old.

However, by the time Grimshaw rose to maturity as a painter, even the Pre-Raphaelite movement had all died out, leaving Grimshaw almost solitary in his pursuit. This criticism is interesting, as it lends itself to the more significant social movement of progress at all costs versus the idea of newer not necessarily meaning better. What is your opinion about this? 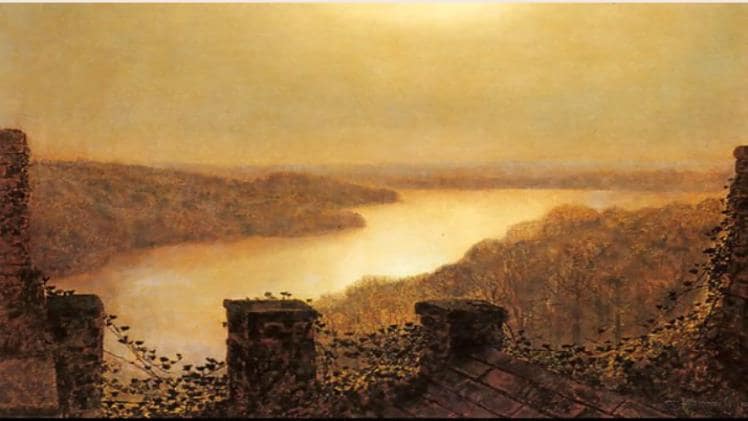 Some Critics Didn’t Consider Him a True Painter

This criticism is perhaps the most polarizing and controversial when learning about John Grimshaw and his legacy as a painter. However, it is nonetheless true that many critics and artists have been so bold as to make this claim when talking about Atkinson, the artist.

Their argument mainly derives from Grimshaw’s use of cameras and lenses to achieve many of his paintings. This truth, accompanied by the fact that John Grimshaw’s paintings show little marks or workings of brushstrokes, ultimately led critics to downplay his ability as an artist.

This might also be one of the main reasons why he is not as famous as other more well-known landscape painters. However, whether this criticism is wholly justified, it cannot be denied that Atkinson’s paintings are some of the most remarkable landscape paintings ever created.

For every artist, criticism is part of the job. Whether fair or not, the true artist knows to use it as fuel toward greatness rather than a cause for derailment. Check out John Atkinson’s paintings and decide for yourself if they are worthy of criticism or praise.

Moving from the UK to Portugal

Where to Find the Best Boating Accessories in Australia

Dubai has experienced an increase in the number of individuals interested in purchasing or renting property in the city over the last several years.

Antenatal Care: Preparing for the complete health of your child

To be updated with all the latest news, offers and special announcements.